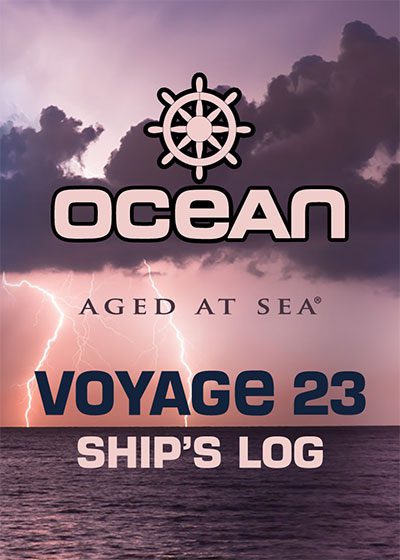 The cargo ship that would carry OCEAN Voyage 23 half way around the world, arrived in Savannah, Georgia where barrels of Jefferson’s Bourbon joined its manifest.

Securely stowed, Voyage 23 left port at high noon under clear skies, warm spring temperatures and slight seas in route to the Panama Canal. The shipping lane was unusually empty and traffic in the canal was very light allowing Voyage 23 to make the passage in six hours and enter the Pacific Ocean days ahead of schedule. Adjusting speed to a slower pace, Voyage 23 dropped below the Equator and while technically it was now winter, the seas remained unusually warm and slight all the way to Tahiti. The vastness of the ocean becomes clear in long crossings of open water. No other ships in sight, no sound other than the whistle of the breeze and hum of the engines and no significant weather disturbances other than well beyond the horizon. As quiet as the sea can be at times, it is never at rest. Waves gently lap against one distant shore while crashing against another.

Such was the journey of OCEAN Voyage 23, quiet and reflective, interrupted only by days of in-port noise and activity. Every voyage is unique and unpredictable. Jefferson’s OCEAN Voyage 23 is a reflection of its travel where it was allowed to rest and take on the solitude of the sea and the character of the barrels that cradled the bourbon. Enjoy the remarkably smooth, buttery and smokey taste of OCEAN Voyage 23 and reflect upon its transforming time at sea.